How To Add Swap Space on Debian 10

Swap memory is a location on harddisk is used as Memory by the operating system. When the operating systems detects that main memory is getting full and required more RAM to run applications properly it check for swap space and transfer files there. In general terms, swap is a part of the hard disk used as RAM on the system.

This tutorial will help you to ADD Swap memory on Debian 10 Buster Linux system.

Use the below steps to create and enable Swap memory on your Debian system via command line.

First of all, Make sure your system have no Swap memory configured on your system. You can check if by running one of the below commands.

Lets create a file to use for swap in system of required size. Before making file make sure you have enough free space on disk. Generally, it recommends that swap should be equal to double of installed physical memory.

My Debian system have 2GB of main memory. So we will create a swapfile of 4GB in size.

The, make it to swap format and activate on your system by running following commands:

After running above commands, Swap memory is added to your system and operating system can use when required. But after reboot of system swap will deactivate again.

You can make it permanent by appending the following entry in /etc/fstab file. Edit fstab file in editor:

and add below entry to end of file:

Save file and close. Now Swap memory will remain activate after system reboots.

Now change the swappiness kernel parameter as per your requirement. It tells the system how often system utilize this swap area.

In this tutorial, you have learned to create and enable Swap memory on Debian system. 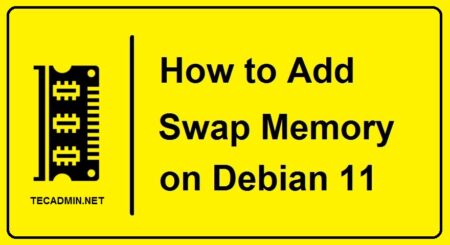 How To Add Swap Space on Debian 11