The crontab is used for running specific tasks on a regular interval. Linux crontab is similar to windows task schedules. Crontab is very useful for routine tasks like scheduling system scanning, daily backups, etc. Crontab executes jobs automatically in the backend at a specified time and interval. In this tutorial, you will learn to uses crontab with 20 useful examples for scheduling jobs. You can also use crontab for the tasks to run once in future only, but for any tasks to run once we recommends to use Linux at command.

If you do not have crontab installed on your system refer article Install Crontab in CentOS/RHEL.

Linux crontab has six fields. 1-5 fields defines the date and time of execution. The 6’th fields are used for command or script to be executed.The Linux crontab syntax are as following: 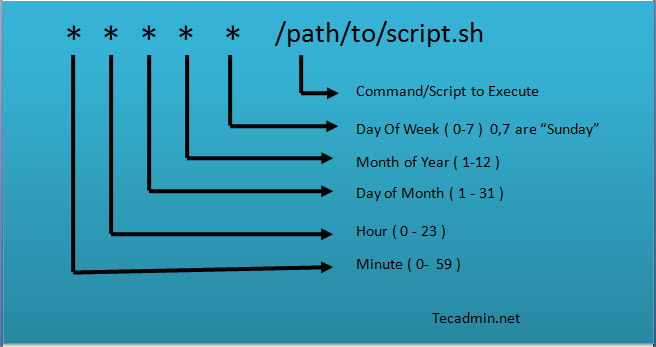 How to Add/Edit Crontab

To add or update jobs in crontab, use the below command. It will open a crontab file in the editor where a job can be added/updated.

By default, it will edit crontab entries of current logged in user. To edit other user crontab use command as below

Change the EDITOR environment variable to change your default editor.

To view crontab entries of current users use the following command.

Use -u followed by the username to view crontab entries of the specified user.

Here is the list of examples for scheduling cron jobs in a Linux system using crontab.

1. Schedule a cron to execute at 2am daily.

This will be useful for scheduling database backup on a daily basis.

2. Schedule a cron to execute twice a day.

Below example command will execute at 5 AM and 5 PM daily. You can specify multiple time stamps by comma-separated.

3. Schedule a cron to execute on every minutes.

Generally, we don’t require any script to execute on every minute but in some cases, you may need to configure it.

4. Schedule a cron to execute on every Sunday at 5 PM.

5. Schedule a cron to execute on every 10 minutes.

If you want to run your script on 10 minutes interval, you can configure like below. These types of crons are useful for monitoring.

6. Schedule a cron to execute on selected months.

Sometimes we required scheduling a task to be executed for selected months only. Below example script will run in January, May and August months.

7. Schedule a cron to execute on selected days.

If you required scheduling a task to be executed for selected days only. The below example will run on each Sunday and Friday at 5 PM.

8. Schedule a cron to execute on first sunday of every month.

To schedule a script to execute a script on the first Sunday only is not possible by time parameter, But we can use the condition in command fields to do it.

9. Schedule a cron to execute on every four hours.

If you want to run a script on 4 hours interval. It can be configured like below.

10. Schedule a cron to execute twice on every Sunday and Monday.

To schedule a task to execute twice on Sunday and Monday only. Use the following settings to do it.

11. Schedule a cron to execute on every 30 Seconds.

To schedule a task to execute every 30 seconds is not possible by time parameters, But it can be done by schedule same cron twice as below.

To configure multiple tasks with single cron, Can be done by separating tasks by the semicolon ( ; ).

@yearly timestamp is similar to “0 0 1 1 *”. It will execute a task on the first minute of every year, It may useful to send new year greetings 🙂

@monthly timestamp is similar to “0 0 1 * *”. It will execute a task in the first minute of the month. It may useful to do monthly tasks like paying the bills and invoicing to customers.

@weekly timestamp is similar to “0 0 1 * mon”. It will execute a task in the first minute of the week. It may useful to do weekly tasks like the cleanup of the system etc.

@daily timestamp is similar to “0 0 * * *”. It will execute a task in the first minute of every day, It may useful to do daily tasks.

@hourly timestamp is similar to “0 * * * *”. It will execute a task in the first minute of every hour, It may useful to do hourly tasks.

By default, cron sends details to the current user where cron is scheduled. If you want to redirect it to your other account, can be done by setup MAIL variable like below

20. Taking backup of all crons to plain text file.

I recommend keeping a backup of all jobs entry in a file. This will help you to recover crons in case of accidental deletion.

Thanks for reading this article, I hope it will help you to understand Crontab in Linux. For scheduling one time tasks you can also use Linux at command.

Copyright © 2013-2020 TecAdmin.net. All Rights Reserved. This site uses cookies. By using this website you agree with our term and services
We use cookies to ensure that we give you the best experience on our website. If you continue to use this site we will assume that you are happy with it.OkNo