This Case Study is a guest post written by Kaira Clark works at Xicom Technologies Ltd – A CakePHP web Application Development company. she’s always happy to share her passion for Marketing and web development. If you’re planning to Hire Dedicated Team for a Brilliant online presence, she is the one for you.

All things considered, 2015 has been an essential year for every PHP designers, and following eleven years, PHP adaptation to 5.0 release, there is another development that is, in the long run, coming your way. However, consider over different development highlights, think about what method would your PHP variant effect your current PHP codebase? Simply evaluate what truly has changed in PHP? How securely can you deal with PHP redesigns? Here, in this post, you will get every solution for your inquiries and will in the end experience what is coming your way while you are working with PHP 7. So, let’s come to the heart of the matter of examination now. 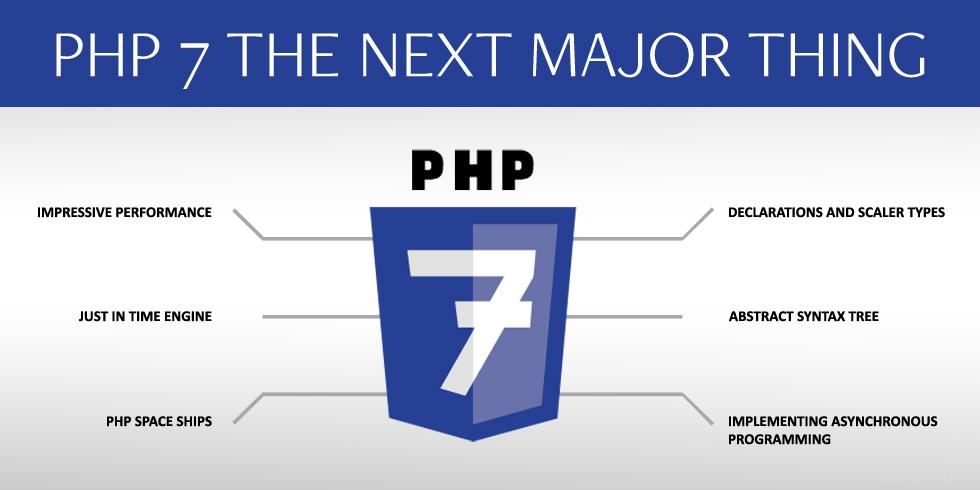 Execution upgrades are most likely one of the primary motivation among developers on why everybody ought to have a report on each server when there is an arrival of PHP stable variant is released. The center refactoring presented by the phone RFC makes PHP 7 faster than HHVM. The official benchmarks are noteworthy: most of the normal applications running on PHP 5.6 will keep executing in every event twice as faster on PHP 7.

Now, let us have a conversation over few essential PHP factors that could eventually break down a legacy application running on older PHP versions.

Solves a series of every inconsistency at the time of evaluating variable-variable expressions. Consider the below code shown:

In PHP 7, the expression is evaluated as . The interpreter will evaluate first.

Thanks to our new uniform left-to-right variable syntax that makes every expression valid which was not possible in early PHP version. Consider the following class for better understanding:

PHP 7 makes it possible to create nested associations with different combinations between operators:

This code snippet would generate a parse error on PHP 5, but goes well with PHP 7.

This is, again a controversial case that relates to more logical errors. It does not make use of multiple default clauses in a switch just because it never occurred any error warnings. In PHP 7 you will come across a Fatal Error: “Switch statements only contain one default clause”.

Engine exceptions work as an error handling procedure in the application. So, all your existing fatal and recoverable fatal errors are efficiently replaced by exceptions, to easily catch all the said errors and take action against to handle such errors.

Let’s refer to the code below about how to handle implementation of engine exceptions to keep backwards compatibility easy:

This code effectively recovers error that are caused by the type mismatch when you call the function a() with the help of string as a parameter.

This execution will continue because an error was handled efficiently. In PHP 7, it will generate a TypeError exception that is not an error. So in this case, a custom error handler won’t be called, and this is the output below that you will come across:


Here an execution will stop as the exception is not caught. To overcome this issue, one should find the exceptions by making use of try/catch blocks. Notice that the Exception hierarchy will change to accommodate on the new engine exceptions with minimal legacy code. Refer to the following pattern below:

The above pattern signifies that a new catch-all Exception is now a Throwable instead of Exception.


Overall it can be used as following expression:


2 -> The null coalesce operator is denoted as ?? that keeps a check whether a value is set to use it.

Scalar type hints come as one of the most well-known attributes that are included in PHP language that makes use of integers, floats, strings, and Boolean symbols as type hints to work with functions and methods. Scalar type hints are non-restrictive by default that signifies that when you pass a float value to an integer, parameter, it will just suppress it to ignite format without any error warnings.

So, to overcome this issue, it is essential to enable a strict mode that will throw errors when any illegal scalar type is passed as an argument. Let’s refer to below generated code:

To make sure that integers are allowed to be passed to double function, then enable a strict mode by including the directive declare(strict_types = 1) patterns as a first line in your script:

This code will generate a Fatal error: Uncaught TypeError: Argument 1 passed to double() should be of the type integer, string given.

Another significant new feature that is added to PHP 7 is its extreme capability to enable the return type of methods as well as functions; that behaves as a scalar type hints. Watch out the below-generated code:

This code snippet runs efficiently without warnings, and the returned value is converted into bool format automatically. By activating strict mode, a fatal error is generated:

Fatal error: Uncaught TypeError: Return value of a() must be of the type boolean, integer returned

These errors are a kind of Exceptions that are caught and handled by using try/catch blocks.

I hope you will enjoy working with all new version of PHP 7. Read more

How To Install LAMP Stack on Ubuntu 22.04 LTS

How To Install and Use PHP Composer on Debian 11