How To Install NVIDIA Drivers on Ubuntu 20.04

Most Desktop computers and laptops come with a pre-installed Graphic Card. You can also upgrade or install a custom graphic card according to your requirements. The wildly popular graphic card manufacturers are Nvidia and AMD.

We need drivers to configure and manage our graphic cards. The Ubuntu operating system has a default open-source driver named Nouveau for Nvidia Graphic Cards.

This default driver is very unstable and does not offer reliability. It isn’t compatible with the latest hardware. The default drivers are mostly being used by old cards. These old cards are not by Nvidia anymore. Hardcore open-source believers and Some users with multi-GPU setups also use Nouveau as it allows the card to share its video outputs. The official NVIDIA drivers do not support shared video outputs.

To get the most out of our NVIDIA graphic card we need to install Nvidia’s official drivers.

In this post, I will describe how to install Nvidia drivers on Ubuntu 20.04. The installation process is very easy and straightforward, So let’s get started.

How to install Nvidia drivers on Ubuntu through GUI

Using GUI to install NVIDIA drivers is very easy and straightforward. This method is quick, efficient, and recommended for the majority of users.

Open the activities menu by clicking on the top left corner of your desktop and go to the search bar.

Now search for “drivers” and click on “Additional Drivers” 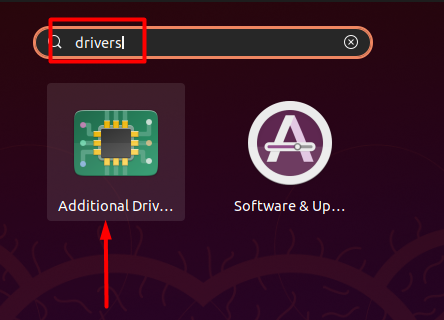 The “Software & Updates” window will open and you will get a list of Nvidia drivers depending on the graphics card installed in your system: 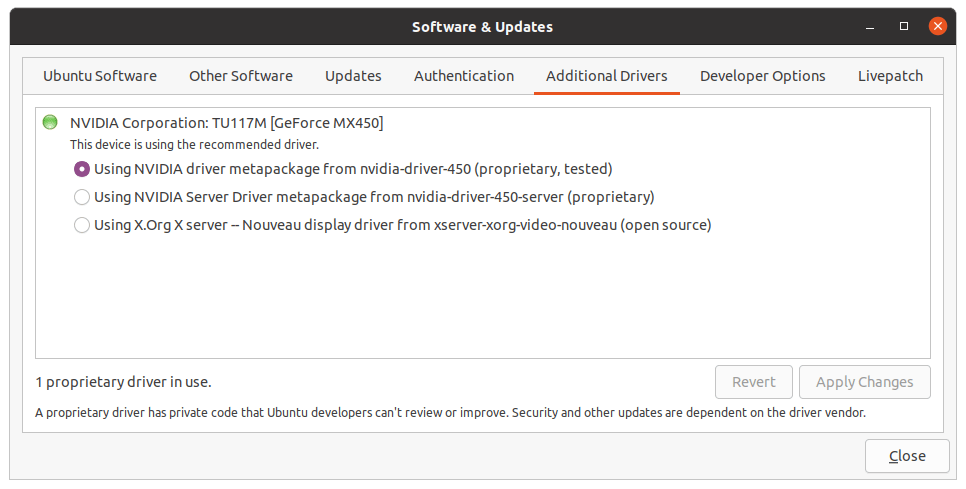 Choose the driver that is compatible with your graphic card and click on the “Apply Changes” button.

Restart your system upon the completion of the installation process. The new driver will start working once the system is rebooted

How to install Nvidia Drivers on Ubuntu with Default Repoisitories

You can also use the terminal to install Nvidia drivers. Ubuntu has the “ubuntu-drivers” tool which can be used to find drivers for all the devices on the system.

Fire up the terminal by pressing Ctrl+Alt+T. Now use the following command to get the details of your devices and their available drivers:

Now to install the available driver, use the apt package manager. Generally, downloading the recommended driver is the best practice:

Restart your operating system once the installation process is complete to let the changes take effect.

How to install Nvidia Drivers on Ubuntu using PPA

To add the PPA repository to your system use the following command:

The terminal will ask for the root password and confirmation.

Once the PPA repository is installed use the ubuntu-drivers tool to get the list of all the available drivers.

Choose the desired driver from the list and execute the following command to install it:

In this example we will install the nvidia-driver-465:

Drivers are software that is used to control, manage, operate and configure hardware attached to the computer. Nvidia’s official drivers are optimized for the newest hardware. They let the user harness the full potential of the graphic cards.

In this write-up, we discussed three different methods we can use to install NVIDIA drivers on Ubuntu 20.04 operating system. Moreover, we can also visit NVIDIA’s website to download and install the latest drivers.

How to run “npm start” through docker

What is CPU? – Definition, Types and Parts

Creating DMARC Record for Your Domain