In the first method, we will download the latest version of the WineHQ source code from the official site. So let’s begin the installation:

RPM packages for wine are not available for the latest versions, So we need to download wine source code. Use the below commands to download it.

Once the download is finished successfully, extract the archive file.

Configure wine using one of the following commands based on your system architecture. This will set the installation environment for Wine according to your system.

The EPEL yum repository also contains the Wine packages for installation on RHEL-based systems. You can install the Wine using the package manager without compiling it from the source code.

Follow the below steps to install Wine on RHLE-based system via package manager:

WineHQ is not included in the default repositories of CentOS/RHEL 9/8, so we need to enable the Extra Packages for Enterprise Linux (EPEL) repository. To do this, open a terminal and run the following command:

Now that the EPEL repository is enabled, we can install WineHQ by running the following command:

This command will install the latest version of WineHQ available in the EPEL repository.

WineHQ is a compatibility layer that allows Windows applications to run on Linux. However, it does not come with the necessary Windows libraries to run these applications. To install the Windows Compatibility Layer, we need to run the following command:

WineHQ allows us to configure various settings to optimize the performance and compatibility of Windows applications. To access the Wine configuration window, we can run the following command:

This will open the Wine configuration window, where we can configure settings such as the Windows version, graphics, and sound.

With WineHQ and the Windows Compatibility Layer installed, we can now install Windows applications on our Linux system. To do this, we can either use the command line or the graphical user interface (GUI).

To install a Windows application using the command line, we need to run the following command:

Make sure to replace “application.exe” with the actual name of the executable file of the Windows application you want to install.

To install a Windows application using the GUI, we need to double-click on the executable file of the application. This will open the Wine configuration window, where we can select the options to install the application.

To use wine we need to log in to the RHEL-based desktop system. After that Download a windows executable (.exe) file like PuTTY on your system and open it with Wine as below screenshot or use the following command. 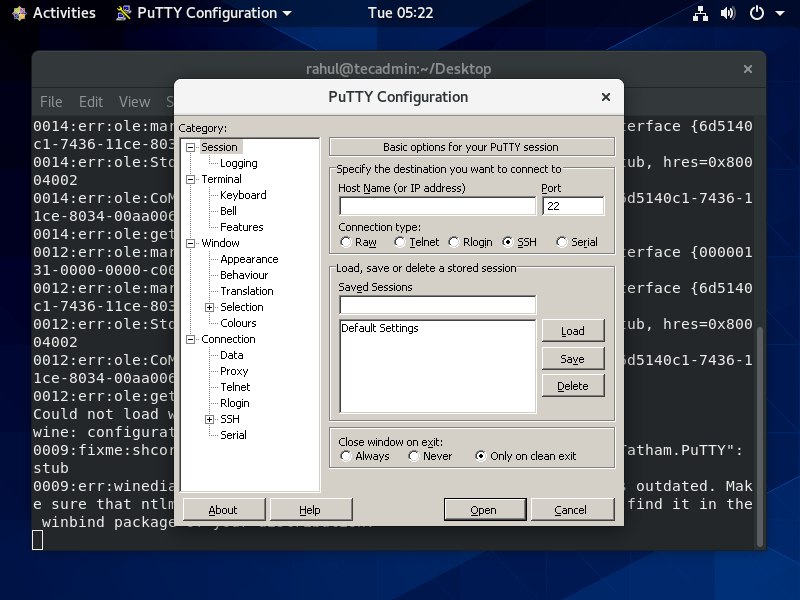 Getting Started with Linux Command line: The Beginning

Backing Up Your Linux System with Rsync: A Step-by-Step Guide