The static websites are the HTML pages, directly severed by any web servers. It may also include some other static assets like css, js and images. In this tutorial you will learn, how to deploy a static website on Docker container.

We assume you already have a static site on your system. For this tutorial, I have downloaded a static website from here. After making some changes, placed all files in a directory on Docker server.

Choose one of the below content for your Dockerfile in regards to web server.

To Use Nginx Web server

To Use Apache Web server

Based on the comparison about Apache vs Nginx to run static site. We prefer to go with the Nginx web server.

Now, You have a Dockerfile for your static site. You can now create a docker image with these files. To create a Docker image run:

The above command will create a Docker image with name img-static-site-example. Use “docker images” command to list available images on local system.

Now, you have a docker image now. Use this docker image to launch a new container on your system. To run your Docker container using the newly created image, type:

The “-d” option detach the container from current shell and run in background. This will print container ID on screen.

Use “docker ps” command to view the running container. In case you didn’t find any container, use “docker ps -a” to view all containers (in any state) on your machine.

Once the container is up and running. All the on port 8080 of host machine will be redirected to container’s port 80. 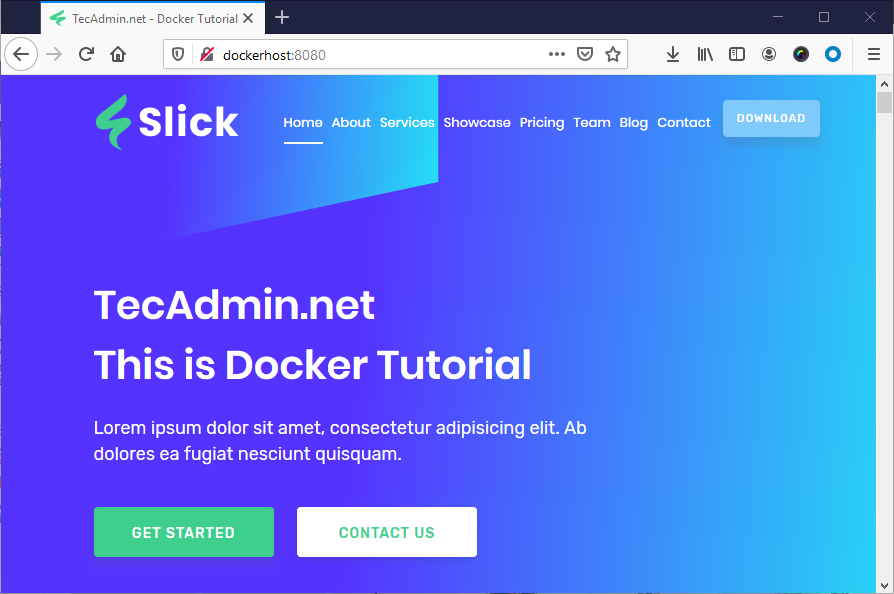 This will help you to easily rebuild docker images and re-create containers without stopping and creating them manually..

Let’s create a file in current directory with name docker-compose.yml.

Now, build your docker image. This will create a docker image with the help of Dockerfile available in current directory.

Then run your docker container using the following command.

Once you have the docker container up and running. You can rebuild image and recreate your container any time by running these two commands.

For example, you have make a change your site. Just run these two commands on terminal.

This will rebuild the docker image and recreate the docker container as showing in the screenshot:

In this tutorial, you learn how to deploy a static site with docker containers. If this tutorial help you, please do not forgot to thump up and share with your social network.

Tags Apache, Docker, Dockerfile, Nginx
Was this article helpful to you? Yes 39 No 7
Advertisement