The Docker containers run services inside it on a specific port. To access that services of container running on a port, You need to bind container port with some Docker host port.

Have a look at below image. You will see that docker host is running two containers, one is running Apache which has some website and other have MySQL. 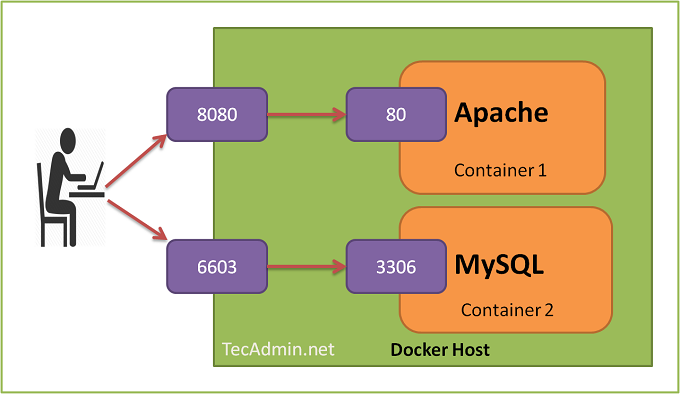 Now, you need to access the website running on Apache container on port 80. Let’s bind docker host port 8080 to containers port 80. You can also use port 80 on docker host as well.

In the second example use our sample project available on Github. This will show you a running example of port binding. Just clone the repository using the following command.

Now run the container using docker run command. The Apache service will start on the container on port 80. You need to specify -p 8080:80 to bind host system port 8080 with container port 80.

You can bind multiple ports as well with a single container, but make sure to EXPOSE all ports in Dockerfile before building the image.

If you need to bind port with the specific interface of host machine define its IP address as below. The below example, port 8080, 8081 will accessible with 127.0.0.1 IP only.

Tags container, Docker, Docker host, port
Was this article helpful to you? Yes 9 No 1
Advertisement